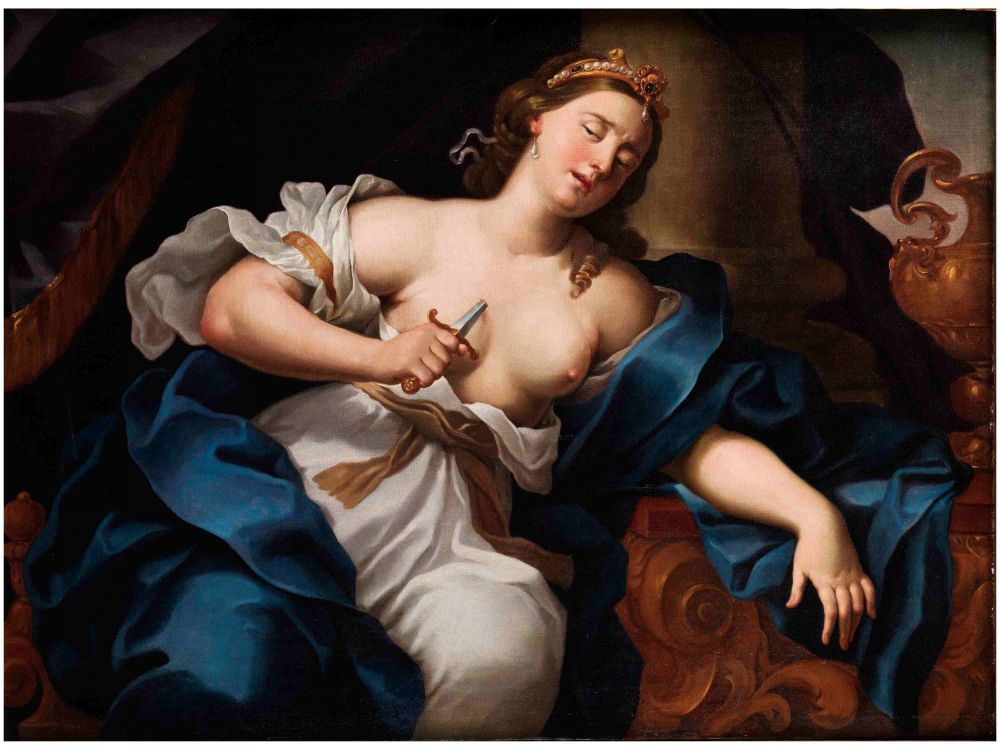 Emilia Romagna’s The Suicide of Lucretia

This morning as I was doing my usual meditation and contemplation, I was struck by an underlying feeling of fear and anxiety. There is so much goodness going on around me– great friends, good health, prosperity, safety, security, stability, a strong sense of knowing my Life Purpose and why I am here on Earth, et cetera.  But why was I still not feeling a sense of connection, trust and union?

I wandered around the apartment, doing my morning ablutions and still maintaining an inner dialogue with my Spirit Guides about the underlying anxiety I was feeling. After having my smoothie, I pulled out my Tarot cards to go deeper and what I found was profoundly moving.

So look, while I intellectually embrace expansion in my thoughts and my desires, there has been the residue of some kind of energetic entity to which I was still clinging subconsciously. I didn’t know that I was clinging onto it until I looked at the underlying feeling of anxiety that was nagging at me today. If you’re in my Emotional Wellness Facebook group, you will have seen the post I made about it a few days back and you’ll know that I did an exercise to help me confront and release this entity while I was working with the Full Moon. Well, I guess I wasn’t totally done with it, but after having this big ass awakening this morning, I am.  I get it now.

The entity about which I’m writing is Victimhood. Victimhood is a tough relationship because it is sneaky in its forms and it manages to hide… OOOOH!  Shit!  Did you see that???  Did you see what I just did? I was just being a victim and talking about Victimhood AS IF IT WAS MAKING ME ITS VICTIM. Did you see how I did that? But that’s the thing– I DID THAT… not Victimhood. I am so attached to being a victim that I even blame Victimhood for what is my responsibility. Victimhood is not sitting here with a gun pointed at my head forcing me to be a victim?  I did this.  This is (was) my natural way of seeing myself and it’s this that has to change if I am ever to be truly Badass.  This is the personality trait that is causing me to feel anxious and disconnected and this personality trait is in total conflict with being Badass.

My friends, there is (was) a part of me that is desperately attached to Victimhood, even though Victimhood told me straight out that it wants nothing more to do with me. Victimhood literally came to me last week when I was in a deep meditation and said that it has served its purpose in my life and that it is ready to be released. Victimhood said it was done and here I am (was) holding onto it and blaming it for being here.

As I started to say earlier, Victimhood is a tough archetype to release because it was so comfortable for me. You see how wedded I was to it because in my mind, the only time I really got attention was when I was the victim of something negative– the victim of poverty, infidelity, theft, abuse, rape, incest or manipulation. Experience taught me that I could rely on attention and care when I was a victim.  Victimhood had integrated itself in my system… or rather, I integrated Victimhood and had subconsciously cloaked myself in it and was seeing myself and the world through its eyes.

As I sat this morning talking to my Spirit Guides, their message almost escaped me because my attachment to Victimhood was so thorough.  I mean that I was so integrated with Victimhood that I thought that it was me. I didn’t realize that I was still dressed in it. Look, I am now in the process of going through my ritual again to release Victimhood, but this time, instead of wishing Victimhood goodbye from the standpoint of being the victim of Victimhood, I am going to take the position of Truth: I AM That I AM, meaning, I AM the powerful being who enjoyed cloaking herself in Victimhood and playing a victim for the first 47 years of her life. I enjoyed the benefits of the attention and being free of responsibility for creating the life that a Divine Being of God would naturally manifest. But now I am through with that role. I release my attachment to Victimhood completely– on all levels. I blame no one for anything, for God is alive in me on all levels… and God is victim to no one.

Gosh.  This is what the badass Full Moon in Aries energy is all about. The Full Moon is always the culmination of something… in other words, it is the end of something that was active and influential, but is now time to end. For me, my relationship with Victimhood culminated in a profound awakening to my personal deep love for the benefits of victimhood and how deceitful I was to myself about it.  I also awakened to how harmful my attachment was and how I was holding back myself from being truly badass.  I had been living my life subconsciously thinking that something was always going to be taken away from me. I was subconsciously believing that I would be robbed– robbed of friends, of money, of time, of energy, of my fair share, of opportunity, of love.  The thieves were many– the government, my friends, a stranger, a terrorist, a sociopath, the president, a policeman, a border patrol agent, Mother Earth, a stone in my path, my own body, cancer, the ghost of my deceased mother… the list goes on and on. My subconscious mind is a mess!  I had been living my life damned near every minute with the belief that something would be taken away from me and that I was always in the position of being the victim of some force that had more power over my life than I did.  This Full Moon has also culminated in me recognizing that if one is addicted to Victimhood (or any disempowered archetype) one cannot feel secure and connected to Source/God/Goddess. The two are not a vibrational match.  You cannot identify as a victim and be a vibrational match to Badassery.  So heck yeah, I would always continue to feel disempowered beneath it all if beneath it all my identity was wrapped up in victimhood.

Now, for the sake of Truth, I must acknowledge that there is a difference between being a victim of a malicious act and identifying as a victim.  There are times when we all will be the victim of something.  We need help, compassion, care and empathy in those cases.  But that is not the same thing as identifying as a victim.  When you identify as a victim as I did, you invite shit to your life because you have made victimhood your banner– your badge of honor.  That’s what I did.  When I was a kid and was molested, I was a victim who needed care, attention and support.  But somewhere along the way, I started dressing myself in victimhood around situations where there was no aggressor.  I started calling it in because I identified with tragic heroines, martyrs and the disempowered.  Look, I’m telling you that this behavior of identifying with the martyr was consciously done because I was in pain and didn’t know how to take care of myself.  I saw movies and read books where helpless women were rescued by wealthy benefactors and had books and movies made about them because it was great!  Yeah.  No.  It was too easy for my young impressionable mind to slip into Victimhood because victims (especially the ones who had a tough exterior and a soft interior) were the stuff of which movies were made. I was living the heroine’s life and at the same time, my suffering was a badge of honor that let me bitch and moan to my friends and excused me from having to think big and take big risks.  I could huddle with the masses and woe is me myself out of big love and big bucks.

So, I’ve sat here for several moments and just felt myself– exploring how I feel without attachment to Victimhood. It feels oddly peaceful.  But let me get back to you in a few days and see if there is anything new that arises.  This deep release work is what I offer in my Emotional Wellness Level I:  Healing the Shadow program.  If you want to get free from negative archetypes, sabotaging belief structures and subconscious feelings that are holding you back, then book yourself in for an Emotional Wellness Strategizing Session and learn how I can help you find the path of excellent emotional health and healing.