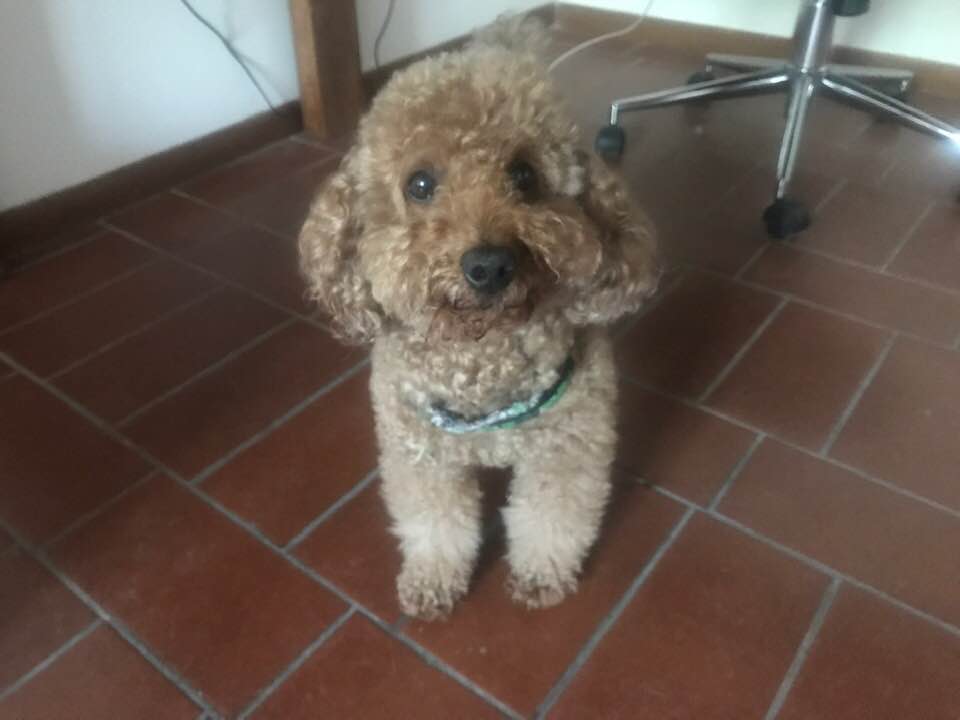 Badass Butterfly intuition at work! Apollo and I were out walking this morning and I saw a dog dart out into traffic from across the street. The oncoming cars saw him, thankfully, but when he got to were Apollo and I were standing, he ran off in another direction. I did not panic.

Now on each of the previous occasions that I have met a lost dog, Apollo gets protective and I can’t get near the stray because he kind of wards them away. So this time, I rushed Apollo home, took off his collar and leash and went out with them in search of the dog.

Now get this. In the past, when Apollo has run off after deer, I have intentionally used my tarot cards and my intuition to guide me to him. I have been successful 100% of the time. Today, I looked to the heavens and I said that I am going to find this dog in the same way.

And guess what! I pulled the 10 of Cups from my Shadowscapes deck and I intuited that I should take 10 steps to my left, which I did.

Guess who I see down in a little garden. That dog!

But you know what? My Badass Butterfly intuition said that something was wrong. That little dog didn’t belong in that garden. I knew that he had wandered in to by accident. I also knew that if I walked away assuming that he was home, something would scare him and he would be out on the street again.

Again, my Badass Butterfly intuition is strong! So I knocked on the doors and it turns out, the doggy didn’t belong there. He was in a kindergarten garden of a parochial school. I talked to the sisters and asked if they knew the dog and they said they did not. They also could not keep him for fear of injury to him or a child. So they let me into the garden and I managed to lure the little guy to me. I put the leash on him (Apollo’s collar was WAAAAY too big) and we went up to the town square. I was hoping that I would see somebody wandering around looking for him, but I did not and so I asked if the folks in the pasticceria recognized the dog.

They scrutinized for a moment and then one of them said, “Is that Alessandra’s dog?”

Then they called his name, “Paco,” and the dog turned his head! The proprietor then took us across the street to where he thought Paco and Alessandra might live. We rang the bell but there was no answer.

So we exchanged phone numbers and then I took Paco home with me and introduced him slowly and gently to Apollo. Really, the morning and afternoon went really smoothly and Paco was resting at my feet while I was working until all of a sudden, he was NOT. He ran to the door and started sniffing. Then he started acting a bit crazy.

My Badass Butterfly intuition was like, “His mama just walked by.” Sure enough, I grabbed the leash and went outside, but nobody was there. I walked up to her house and as I rang the doorbell, I noticed that the workers at the pizzeria were staring at me strangely. I asked them if they know the dog and they said the owner was just there looking for him. I gave them my home address and we went home to wait.
Sure enough, Alessandra came home and she was tearfully united with her beloved Paco. She was very grateful.

HOLY SHIT. I’ll tell ya. If I came home and found my dog missing, I would freak the heck out. It would kill me. But the moral of this story is— USE YOUR INTUITION. Use the Force, Luke. That shit is fo’ real! If we are willing to pause and listen, the Universe is willing to talk and direct. And heck! If you get too confused or doubtful, find your local#BadassButterfly and have them intuit for you.

If you want to become a Spiritual Life Coach and become a teacher of Badass Butterflies, then contact me for a complimentary session to discuss the possibilities.