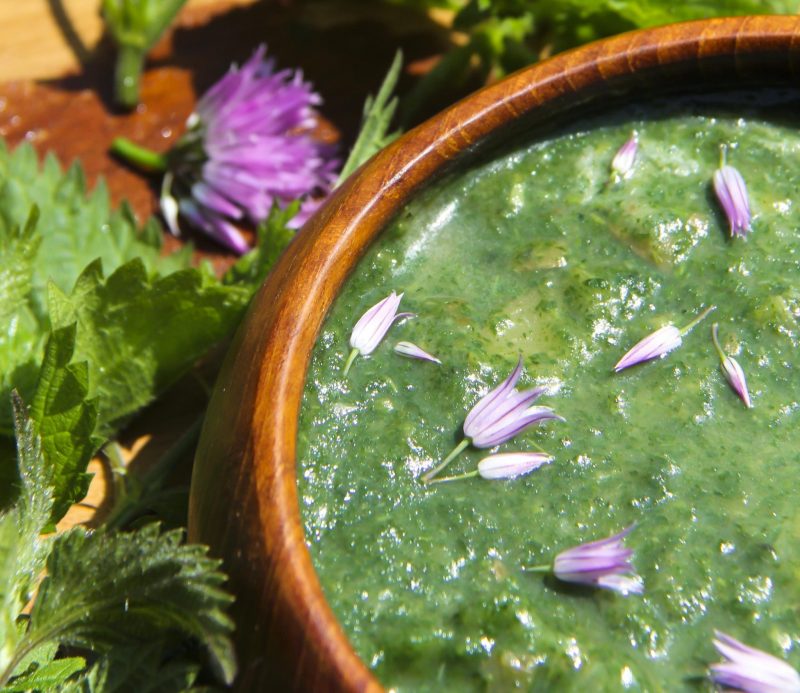 This recipe comes from Trinity Bourne of www.TrinitysKitchen.com.

The best time to pick nettles is before they start developing seeds. The seed produces an irritant that may bother some folk. Spring is normally the best time to gather them, although if you cut them right back after the first seeding, you will get new growth later in the season too. The youngest, freshest leaves, without the stalks, are optimal. Unless you are feeling brave, I recommend gathering stinging nettles with rubber gloves. Drying or soaking in water, sauce or oil will instantly remove the sting, making them edible both raw and cooked.

So, nettle soup! You can toss nettles in to lots of different dishes, although if you want a super infusion of this nutritious gem then you might enjoy my thick, green, ‘Very Nettle’ soup.

Given my passion for recipes my cookbook also has a few other really delicious nettle recipes such as ‘Hempy Nettled Potatoes’, ‘Nettle & Mushroom Stir-fry’, ‘Trin’s Soul Food Special’ (nettles in a sweet potato, coconut & shiitake mushroom soup)  and ‘Sun-dried Tomato & Nettle Pate’. You can find out more about my book here: Trinity’s Conscious Kitchen.